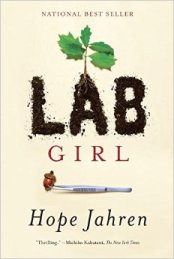 A memoir about trees, flowers, seeds, soil, friendship, and most importantly a fascinating life of geo-biologist Hope Jahren, Lab Girl takes readers through the trials of building labs and gaining recognition as a woman and a scientist in a largely male dominated field. Through her control of prose Jahren not only shares her life spent in labs but teaches the reader about plants, and dirt, and flowers, and the world around us.

This book begins with chapters that alternate between Hope’s life growing up and the growing of a tree. I will admit, at first I was drawn more to the chapters about plants than the ones about Hope, but as the book moved on I grew fonder of Hope’s story and couldn’t put the book down (I missed a few meals reading this one). This story has three parts; an examination of the scientific method and how Hope became part of the world of science, her place in the male-dominated world of science as a bipolar female scientist, and lastly anything and everything I’ve ever wanted to know about how plants grow up.

Throughout the book, Hope is searching for the answers to all of her questions, both scientific and personal, and when she finds them you can’t help but cheer along with her when she struggles you feel her struggle just as strongly. Her control of language pulls you in and creates believable characters out of very real people, which is a feat in itself, often in the nonfiction that I’ve read, the other people feel like caricatures of themselves. But her friend Bill, whose first interaction with Jahren goes like this:

“Looking for gold?” I joked, trying to strike up a conversation.
“No. I just like to dig,” he explained without stopping. “I used to live in a hole.”

And he should, by all realms of the imagination, probably feel like he wasn’t a real person. However, in Jahren’s prose he is believable, endearing, occasionally infuriating, and everything you’ve ever wished for in a friend, or lab-partner-for-life. She is able to show readers the core of the people that she encounters, and how they fit into her story.

Her language also rises and falls with where she is at the moment in her life she is sharing with us. When she is critical and scientific her language shows that, when she’s hurting the reader can feel that through her words. Halfway through the story she becomes pregnant and for the safety of the child growing within her the doctors take her off of her medication, and the reader follows her through the highs and lows of the panicked state that ensues. Jahren is able to create prose that not only tells the reader what is going on but will set your heart racing along with hers and move you to feel what she is feeling in all of these moments.

Recommendation: If you like plants, and trees, and dirt, but know nothing about them or if you know plenty about them, if you enjoy a good memoir, and/or you like interesting people. Read this book, it’ll make you look at the world around us differently.